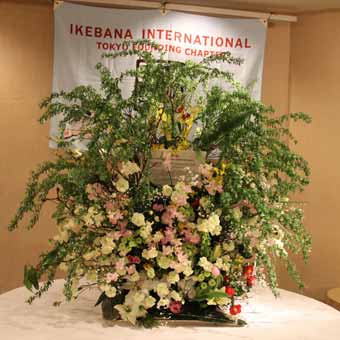 Ikebana International Tokyo Founding Chapter 55th Anniversary Commemorative Exhibition was held at Hotel Okura Tokyo on March 2nd. Nine schools and more than 100 members created beautiful works and celebrated the Anniversary.
In commemoration luncheon, Headmasters and Headmistresses of Ikebana schools and Honorary Advisor of TFC talked about the chapter’s history. The party was held in a nice atmosphere from the beginning to the end. After the party, a tape cutting ceremony was held in front of the exhibition hall at 1:00 PM. The stream of visitors was never broken despite the heavy rain and the hall was alive all the time. A tower of flowers as a memorial to Tohoku earthquake disaster victims was set in the exhibition hall, and everybody had placed flowers in the tower. It was complete around 3 PM. TFC would like to thank participants for their cooperation.
Tokyo Founding Chapter has already begun to walk towards the 60th anniversary.